What happened with Frank Gehry on the Eisenhower Memorial

December 7, 2012 Permalink
Last summer I visited the Lincoln Memorial for the first time in several years. I was struck by how visceral my reaction was. I walked into the shady, temple-like structure and I instantly felt at peace. I was uplifted. I felt like I belonged to something bigger than myself.

The powerful, gravity-hewn figure of Lincoln, surrounded by the beauty of the architecture, did its job. A monument must transform and uplift the visitor; it must impart to him a feeling of power and potentiality, of what can be. At that moment, I was proud to be an American sculptor who belonged to a tradition of grand importance.

Shortly thereafter, I received an email asking me to phone Gehry Partners ASAP. I was, again, deeply moved. It could not be an accident that I received this call so soon after my experience with the Lincoln memorial. I felt that I was in sync with my purpose in life. The sculptures that I would make would not only represent Eisenhower as a man of tremendous achievement, but would also represent our country at its best. I felt that I had spent almost thirty years, and tens of thousands of hours in my studio, to reach this moment. I had never followed the fads of the art world, but instead worked to create an art that was connected to the rich tradition of classical art, but had the dynamic, expansive energy of America. My art has always been a statement about our highest potential as human beings—about rising to the occasion.

On August 10th, I was flown to L.A. to see the project plans for the Eisenhower Memorial and to meet with Frank Gehry.

When I saw the memorial models, my heart sank. The project was trying to reinvent the wheel with newness, and it was missing the point entirely. Components were stiff and compartmentalized like a natural history museum exhibit. There was no focal point, but a lot of elements that did not work together to deliver a unified visual message.

How could I tell the famed Gehry that the design and sculpture of this project had to lead our world and to direct us towards our potential? The sculpture must serve as a focal point in a sacred space that transforms the viewer, just as Eisenhower transformed the world through his actions as a leader. Perhaps Gehry was unaware of what could be.

My first question to Gehry partners was: Did you bring me in to be your in-house sculptor, or are you asking me for my creative opinion and 30 years experience as a figurative sculptor? They replied that they were basically unhappy with their current design and that they wanted to know what I thought.

I was thrilled. I thought of the Lincoln Memorial and the sacred space with its elevated energy.

After lunch, we began the meeting with Mr. Gehry himself. I shared my thoughts.

I spoke of the need for a sense of hierarchy within the sculptures of Eisenhower surrounded by his troops. The format should be changed to a relief, in which Eisenhower is the dramatic focal point, which is accomplished in several ways. In a relief, the use of perspective creates depth, and ultimately scale, within the composition. Eisenhower would be sculpted in the foreground in high relief, almost in the round. The troops would be situated farther away, smaller, and in lower relief.

Eisenhower would not only stand out as more important, he would also be more luminous. He would spatially project out more and catch more light. The values of light falling on this part of the composition would create a clear hierarchy and focal point. He would be part of the men, and he would also stand out as their leader. Working extemporaneously with a partner, I created an ad-hoc composition that opened up the central space, eliminating a giant tree that stood in the center and blocked the view of the sculptures. I cut wood blocks that took a horizontal composition and made it vertical.

I stated in the meeting that the design had to become sacred, because of Eisenhower’s historical importance. Making the blocks vertical would lead visitors to look up, giving them an expansive feeling. They would also be able to read the writing about Eisenhower with a sense of elevation, because of the heightened perspective.

Within this quickly constructed design, the relief is attached to one vertical block, and opposed on the other side of the piazza by a similar block, in front of which would stand the solitary figure of President Eisenhower. The president is elevated on a pedestal of five feet. The scale of the figure would be 9-10 feet in height. The relief would be approximately 18 by 11 feet.

The architecture would create symmetry and tie these two different sculptures together. The symmetry would leave the visitor with a memorable, visceral experience.

I stressed to Mr. Gehry and his team that there needed to be a sense of monumentality, yet the sculptures still had to feel human. I mentioned the Houdon sculpture on Wall Street as an example of the refined, yet intimate character that the free standing sculpture of Eisenhower needed. Mr. Gehry said, “I like it. I see what you are trying to do.”

We talked for another hour, coming to the arrangement that I would receive funds from the GSA to make these two models, the relief and the figure, which would then be presented to all the committees. The meeting ended with Mr. Gehry saying, “This has been a great meeting and we are really happy.”

I was instructed to submit a proposal with numbers to procure funds for my work. I was specifically instructed to make the numbers adequate for my needs, that is, to raise them from my initial ballpark figures. I did so and submitted a document. I was told that they wanted me to get started right away, and they would get GSA to release funds the following week.

Several weeks passed. I waited with growing confusion, as I had been explicitly told that I was Mr. Gehry's first choice. I submitted two more documents concerning pricing.

On November 16, I received a phone call from the team at Gehry Partners saying that, stylistically, I would not be selected for the project. I am puzzled.

Moreover, I am disappointed. I was inspired and excited to be able to use my talents to create a work to honor one of our greatest presidents. Needless to say, stylistically, my work would have been created in form and finish appropriate for a presidential memorial.

I was never given a chance to show my sculptural skills in an honest competition. Things were decided with the submission of paperwork, and perhaps, with behind-the-scenes political concerns in mind.

I am a visual artist, so my art is first and foremost visual, not written. It is unfortunate that I had been judged by a verbal proposal.

My dream had been to create timeless art in a transformational space. When I lived in Rome, I walked into the Piazza of the Campidoglio and I immediately felt different. I was struck by the central sculpture of Marcus Aurelius, uplifted and regal on a pedestal. The simplicity of what had been designed by Michelangelo was a template. I envisioned Eisenhower both as a statesman, exemplifying the contemplative life, introspective in thought, and Eisenhower as a soldier, exemplifying the active, expansive life. These striking images of a hero who leads a nation through transformation would serve to inspire viewers and to show what we, as a nation, can be. The memorial would have been designed for the benefit of the people.

In the end, I am writing this piece not because of my own disappointment, but because I feel the needs of the people and the nation are not being served by the discordant vision imposed on the memorial. I am arguing for quality--that's why I am posting these words.

FINALLY COMING TO A CLOSE ON THE 32" APOLLO 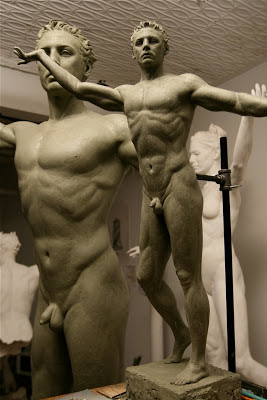 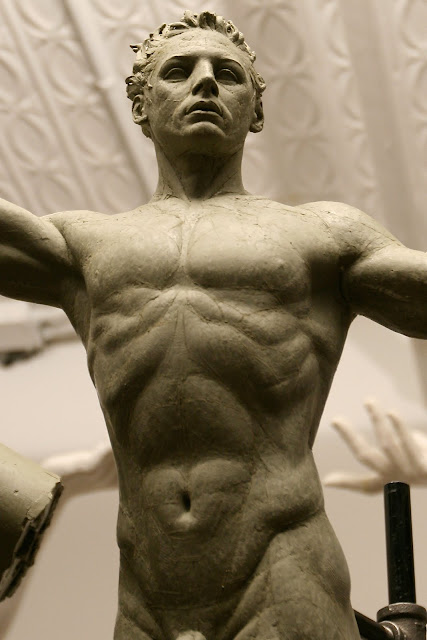