A SOLDIER'S JOURNEY- THE CLASSIC MONOMYTH

Two years ago I was faced with the task of-How can I tell a story that everyone will understand clearly.  How can I tell a story that has universal meaning.
And in so doing create a WW1 Monument honoring the men, and women that went through this horrific moment in global history.
Well now I'm on the other side of that in terms of the storytelling for the 9” sculpture Maquette. What WW1 looked like is told through a visual narrative called A Soldier’s Journey. It is a story of a soldier and father, who departs from home and family, traveling to the distant shores of Europe, experiencing the horrors of war, only to return  home again forever changed. 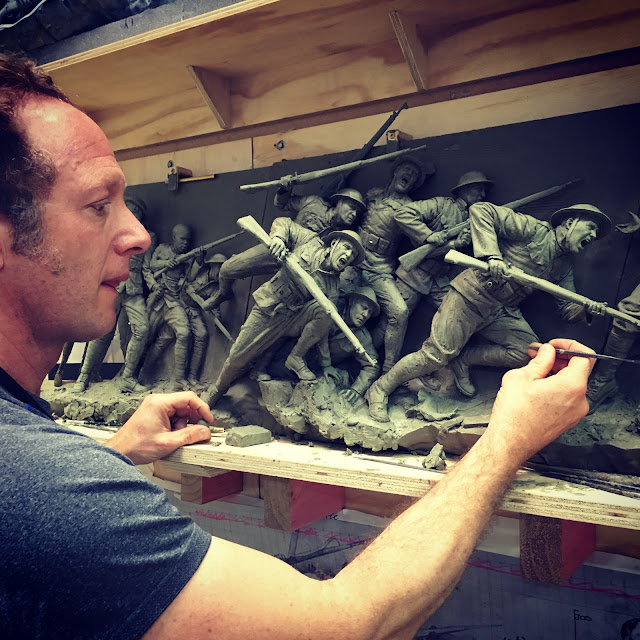 35 years ago when I began learning the craft of making art, I was always taught to work from general to specific. And that lesson became my mantra as I proceeded in this incredibly complex design.
It took 9 iterations over 12 months, with 12,000 pictures taken of re-enactors in my Bronx studio to create a story of transformation and change that would explain this War to the Memorial visitor. The strangest part of this process is that I was unaware as I assembled the scenes and drew out the final drawing that I was working in the template of what Joseph Cambell calls a Monomyth. It has also been referred to as the hero's journey.

test print- Clay sculpture- Initial drawing concept of A Soldier's Story
It is only recently that my wife, Traci Slatton, an internationally published author, and a gifted story teller, looked over at me at 6am one morning over breakfast and said, “ You know that Soldier’s Journey that you are doing is right out of the template that has existed for ages in many different cultures of myth.”
Joe Weishaar my designer partner had said to me back in the fall of 2015, “ Create a beginning, a middle, and an end." But I was completely unaware that what I was doing visually fit an age old way of telling stories.
Traci continued and filled me in,” You ought to read up on this. Joseph Campbell refers to it as, "mankind's one great story." This structure of narrative involves a herowho goes on an adventure, and in a decisive crisis wins a victory. (Just to name a few, it is found in Native American culture, Greco Roman culture, and Judeo Christian culture.) The protagonist then comes homechanged or transformed and wiser by his passage through this perilous task.” My wife has always been very instrumental in helping me find the right track for the story in my art. When you live with somebody that's gone to Yale and Columbia, there is bound to be an intellectual conversation at the breakfast table! Picking up one of Joseph Campbell's books on the dinning room table she filled me in on the road that I had taken. It was a little shocking to realise that somehow I had downloaded a storytelling template that had existed for ages in many different cultures to explain the story of WW1. 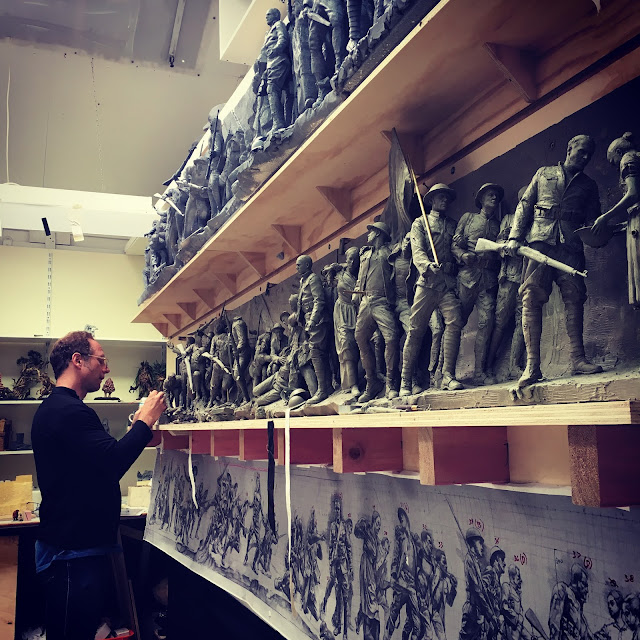 With more reading I found that Campbell defines the function of mythology as the provision of a cultural framework for a society or people to educate their young. Every epoc, every culture, every society has myths. It provides society with an explaining mechanism for coping with the human condition. Myths provide people with a means of coping and guiding their passage through the different stages of life from birth to death.”
Mythology makes us aware that we are not the only ones going through this moment in our life. And it also makes us aware that we belong to something bigger than ourselves.  This leads us to a realisation that these themes portray universal and eternal truths about mankind.
Why had I gravitated toward this way of explaining what WW1 looked like. For me myth has always been a way to fit the sculpture into a framework that uplifts with power.
I was deeply affected as small child living in Italy and being surrounded by the visual splendour of the art and the architecture. There was always a sense of going beyond the mundane or average in the sculpture and art. Art spoke about grandness and fit within the structure of heroic narratives. This art was a represention of us in sculpture and drawing presented in such a powerful and visceral way. It was art that rose to the occasion. Sculptures like the Michelangelo Moses carried such force and emotion. And to a 5 year old standing in front of the 10 foot high Moses ready to spring and discharge his ire and fury, this had a lasting effect!
Myth speak of heroes. Myths place us in a universe were we belong to something bigger than ourselves. And certainly the soldiers that entered into this hell and walked away were incredibly brave and heroic. This war transformed millions of people’s lives, and even though the transformation was devastating on a global level, there is an element of the human race rising up above the ashes. 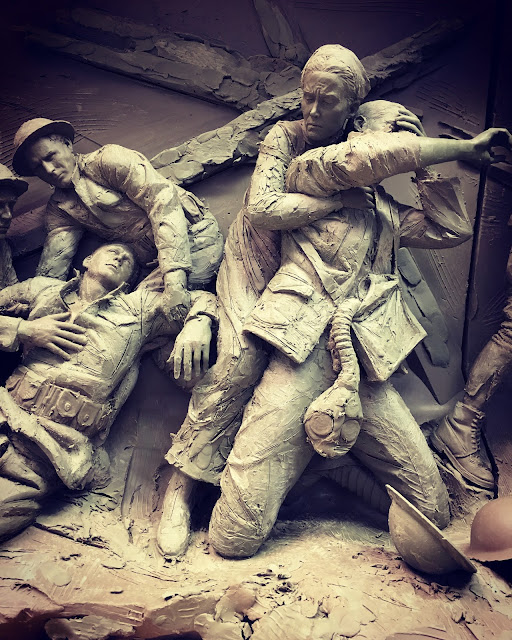 I believe it would be a grave injustice if these soldiers and women represented as average. I would expect that the art would take the real in the mundane and elevate it to a higher stature to show its historical significance. To show the monumentality of what these people went through. Using the monomyth template story creates an amazing structure to deliver a relief wall that is dramatic, emotional, full of movement, emotion and force.  It's a way to represent the men and women as larger than life. The relief wall tells the story in such a visceral uplifting way that no one can walk away from this bronze wall without being affected. 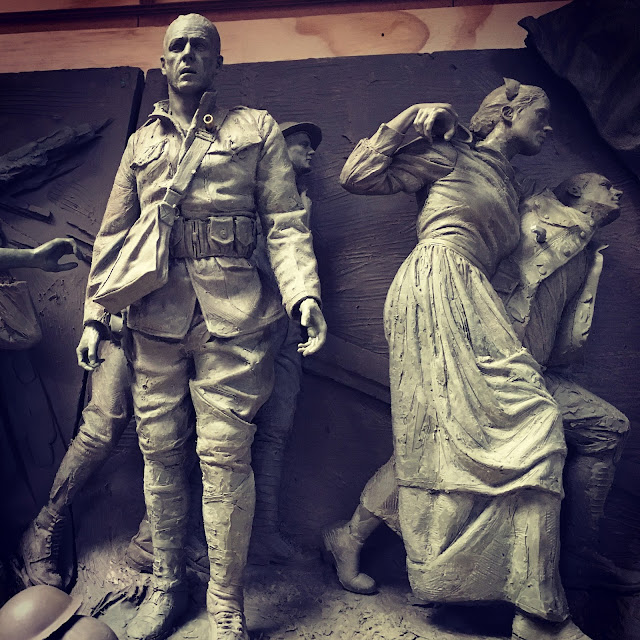 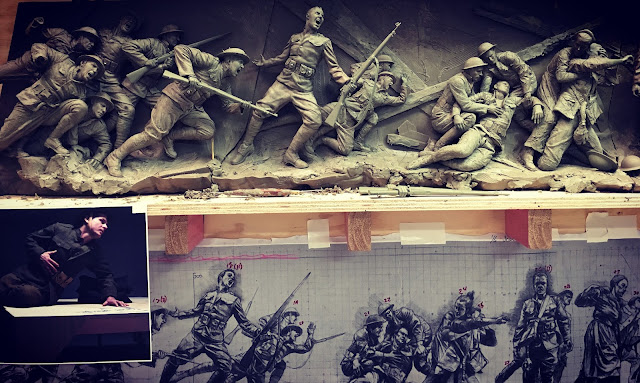 Below I have broken down the structure of the monomyth and included a diagram from Campbell. I have also included a diagram of the protagonist(father /soldier)as he moves through his journey in the relief wall.
Campbell describes this template of the division of the story in 3 “acts” or sections;
1. Departure
2. Separation
3. Return
1. In the departure part of the narrative, the protagonistlives in the ordinary world and receives a call to go on an undertaking involving risk. The protagonist is reluctant to follow the call, but is helped by a mentor figure.
2. The initiation section begins with this protagonist then crossing the threshold to the unknown, where he faces tasks or trials, either alone or with the assistance of helpers.
3. The hero eventually reaches a crisis in his adventure, where he must undergo "the ordeal" where he overcomes the main obstacle or enemy, undergoing an elevation or apotheosis and gaining his reward.
In the return section, the hero again traverses the threshold between the worlds, returning to the ordinary world with the understanding or knowledge he gained, which he may now use for the benefit of his fellow man. 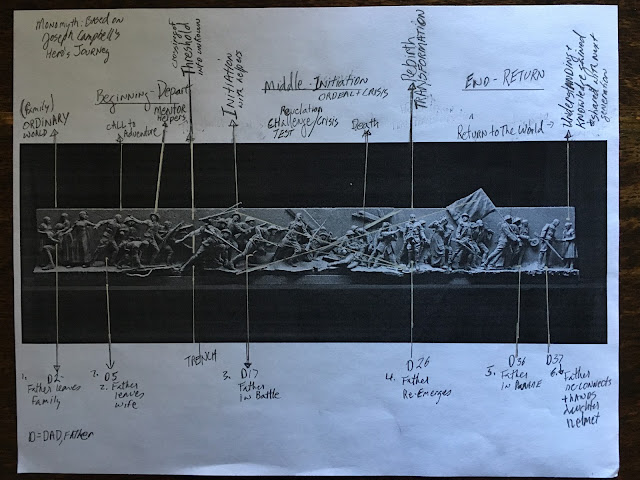 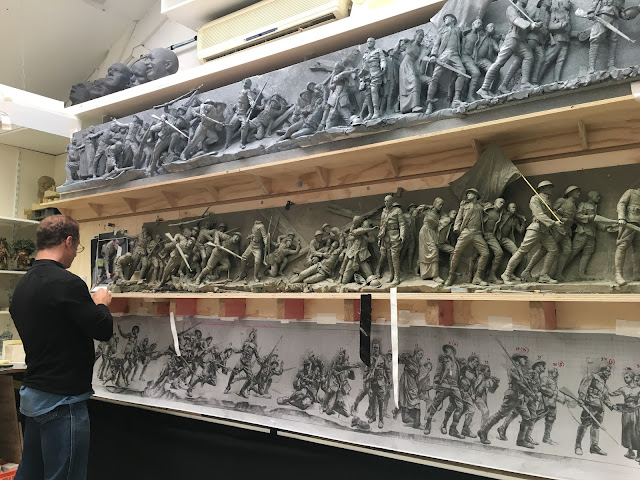 The diagram is loosely based on Campbell (1949) and more directly on Christopher Vogler, "A Practical Guide to Joseph Cambell’s The Hero with a Thousand Faces" (seven-page-memo 1985) 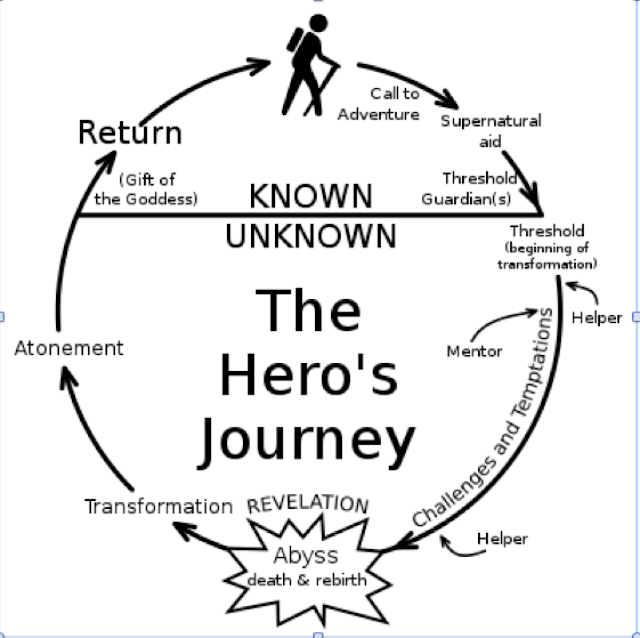